Death of the Black Doll

The sobbing African American girl hurled the black doll onto the ground and started to chop it with a hoe. The broken-hearted child, Mary Robinson, was born in 1943, the daughter of black sharecroppers. She grew up on a white-owned farm in the countryside north of Montgomery, Alabama.

Decades later, she stared into my eyes. and told me, “One Christmas, Shane [her sister] and me each got a doll, the only one we’d ever had. But when we looked at our dolls, Shane got a white doll and I got a black doll, and neither had no hair. I was little, probably six or seven, and I began to holler. I didn’t want no black doll. I wanted a white one like Joy’s [her white friend] or at least one like Shane’s.

“So Mama told me that there was only two left, ‘cause Santa Claus didn’t have but two. He had a black one and a white one, so he gave the black one to me.

“I felt so bad, I beat that doll to death. It was a hard rubber doll, little bitty, with no hair, just lines on it. And I took that doll out there behind the smokehouse. We had a big stick, and I beat it and beat it and beat it ‘til I beat off all the legs, the arms off, the head off. And all the time I was beating it, I cried, “I don’t want you, you old black doll, you!’ I just cried and cried.

“The doll was hard, and it took quite a bit of beating to break it apart. Then I went and got me a hoe and I chopped it into pieces, and I buried every one of those pieces into a different hole. “For a long time didn’t nobody knowed what happened. Shane made her doll all kinds of clothes, and I thought her doll was much prettier than mine had been. Finally, one day she was playing with it, and Mama asked me, ‘Mary Jimmie?’

“I told her and she said. ‘Well, I bet you one thing, young lady. I bet you ain’t never gonna get you another one!’

“And I never did. I beat that doll of mine ‘cause I just could not stand the idea that my sister had a white doll and I had a colored one.”

Mary gazed at me after she told me her story about killing her doll. We had just met, and I’d turned on the tape recorder. I was stunned. I felt like my heart was broken that a little girl should feel such self hatred and fear. I just shook my head back and forth.

Mary and I have talked about that story frequently over our 40 years of friendship. She said that when she thought back at it, she was simply terrified of being African American. “I was plumb scared to death of the Klan.” 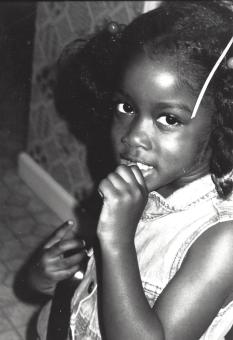 I sat drinking Mary’s coffee and thought of psychological tests of African American children that were done before the 1954 Supreme Court order to integrate schools in the South. The results of those studies, done by Kenneth and Mamie Phipps Clark, were presented as evidence in the case of Brown v. the Board of Education of Topeka. In the experiments black children were given either white dolls with yellow hair or brown dolls with black hair and studied for their reactions. The children responded with enthusiasm and praise to the white dolls and forcefully discarded those that were black.

I am white and my ex-husband and I had adopted one of our daughters. She was mixed race–African American and white. Shortly after her adoption, I sat in a doctor’s office and thumbed through a magazine. I turned a page and saw reproductions of children’s drawings. A series of self portraits of young black children displayed stick figures, often missing arms or legs, mouths, eyes, and hair. Another series, also drawn by the same black children, depicted white children. These images were drawn in full, complete with arms, legs, hands, hair, smiles, and eyes.

I sat motionless for a moment. Was this the internal reality my culture was going to teach my vibrant baby daughter? Perhaps my love for her would not be enough. My heart sank, and the moment stayed with me. Now Mary and I stared at each other, puzzling over a crime done to a little girl so long ago.

I would have found Mary’s story of killing her doll too heartbreaking to write about if Mary had not grown to be such an exuberant, functional person. Not only did she overcome her childhood fears and self-hatred, but she became a leader in the African American freedom movement – participating in the civil rights crusade, especially in voter registration. and then being recruited as a worker to integrate the all white textile plants.

While she was working in the J.P. Stevens textile mill in Montgomery, she was recruited again, this time by the Amalgamated Clothing and Textile Workers Union, where she became a leader. She went on to take part in other political activities.

Now, old like me, she no longer participates directly in politics, but she is a “center woman” for her large extended family and multitude of friends, whose activism she encourages. I am inspired by Mary’s granddaughter Sasha Johnson, also a political activist who takes after her.

I try to analyze the process that took place in Mary’s home community and the larger society as they helped her develop positively from such a cruel, tragic, and exploitative beginning. The whole cotton production system that underlay much of the industrial development that has made categories of white Americans rich was based on child labor and the constant work of African Americans families. Living on white farms, entire black families toiled from sunup to sundown for barely subsistence wages. They were kept in place by hunger and violence.

Certainly, Mary was an resilient child, but from what did her resiliency come? The violent social setting into which she was born was designed to break her, to devastate a poor, black girl’s heart in such a way. It depended on a population of workers who had been so hurt and hemmed in by violence they would not resist. But they did.

Beginning with the African diaspora, the enslaved millions fought back, often drawing on their African heritage. Mary learned those techniques from her black community and beloved parents. She also lived just north of Montgomery, and in 1955, Rosa Parks took her famous bus ride. Mary was fascinated with the early civil rights movement, skipped school in order to observe it, and began to participate as soon as she was older. Within years, she also came in contact with the labor union movement and drew upon it’s centuries of history.

She also drew on her own personal inheritance. She was intelligent, nosey, observant, and energetic. She had a profound religious faith in the tradition of the black church, and she had a vision of justice. When racial violence occurred, Mary’s mother reassured her that there would be a better world. “Give God time. Give God time,” she explained to her children.

She Lights the Path

Many people touched Mary’s life in a profound way. They are so important I will describe them in a subsequent blog. Mary also lights a path for those who come in contact with her. When I am tired and discouraged, I call Mary. Just her greeting lifts my spirits, and within minutes I am renewing my commitments. Watching the news and working her phone, the child who murdered the doll made in her image, now keeps circles of people inspired to work for a better world.

1 Response to Death of the Black Doll